“The darshan, sparshan (touch) of 1008 Shiva lingas with 1008 appellations of lord shiva (Shiva Sahasra Naam) consecrated at Ramaneswaram let you free from difficulties of life and predominantly from the cycle of birth and death.”

Shiva is an ancient appellation since the lord’s existence. Shiva linga is the symbolic representation of Lord Shiva. The consecration of Shiva Linga has its significance. The Lord himself confirmed to Lord Brahma and Lord Vishnu that he dwells in the form of Shiva linga for the benefit of the world. Shiva lingas consecrated by many a deity stands as a testimonial, defining the glory of Lord Shiva and the importance of consecrating a Shiva linga for a seeker in his life.

Shiva is glorified with many hymns and many verses in his worship. Shiva sahasra nama stotra (1008 names of Lord Shiva) is an age-old stotra that elevates Shiva as the lord of lords. This stotra is Stavaraja, the mystical prayer of Lord Shiva. Lord Brahma authored this stotra and initiated it to Maharshi Thandi; Maharshi Thandi initiated to Maharshi Upamanyu; Maharshi Upamanyu initiated to Lord Sri Krishna, and Srikrishna made it available to the world.

The benefits of Shiva Sahasranama Stotra are identified by Siddhaguru and penned a script that resulted in the consecration of 1008 Shiva Lingas here at Ramaneswaram. Siddhagurus’ message from consecrating Shiva lingas is that “To get in is to worship out”, you understand and worship lord externally to experience Him internally.

Visitors can avail an opportunity to participate in Nitya Aradhanaseva at no cost from 8am to 9am IST everyday. 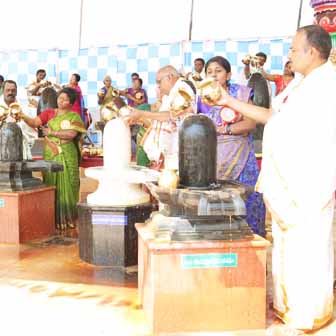 Devotees can take away the energy of lord shiva from shivalinga by performing Abhishek pooja to it. 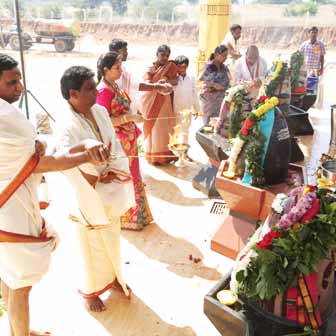 Devotees can perform Archana to a shivalinga as a thank giving gesture to the lord for providing the essentials for their survival.

An opportunity for a seeker striving to achieve the grace of Lord shiva externally to survive and internally to experience his nature.