One who steps into this divine shrine, the Kailash of earth, experience the Oneness in Otherness with an in-depth perception about a philosophy that is ancient and spread to all facets of the spiritual technology (spirituality).

The registered name of Ramaneswaram is Shiva Shakthi Shirdi Sai Anugraha Mahapeetam, established in 2012. It is built upon a land where Ancient Veda Rishis, yogis and deities hovered. In the beginning, this was a land with full of stones and rocks, later rejuvenated and converted to a holy place with support of dedicated and determined disciples of Siddhaguru. Ramaneswaram is now the home of Siddhaguru’s mission of campaigning Lord Shiva, Goddess Shakthi and Shirdi Sai and residence for those who are passionate about attaining divinity. Ramaneswaram is the immediate instance of the ancient Indian philosophy, the non-dualism.

Mission - You Are God

The main aim of Ramaneswaram is to create an awareness of oneness (human is God) in an individual through a customized structure from the worship of Lord Shiva (The God of oneness) in the form of Shiva linga to the meditation of Lord Shiva through kundalini awakening by a process of Shaktipat, the transmission of divine energy by Siddhaguru. 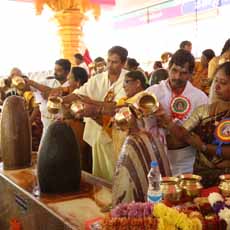 Ramaneswaram is an ashram for seekers who desire to submerge themselves in the ocean of ultimate bliss. Over 150 volunteers extend their support regularly, taking part in various sevas starting from Nityaradhana to 1223 Shiva lingas and 24 idols consecrated here to various other practices for transforming their lives. Even visitors are given freehand to take part in this Sevas as they fit for.

Sahasra Shiva Linga Prathista, the consecration of 1008 Shiva Lingas with 1008 names of Lord Shiva, is the first project of Ramaneswaram. The project started with an aim to spread the concept of oneness in otherness and oneness in self in 2015 and successfully reached out to all the individuals irrespective of their culture, religion, and economy. Siddhaguru accomplished the project with the supporting hands of donors and volunteers in 2019. 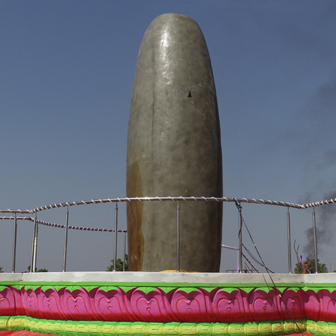 Bana lingam is the Shivalingam of the highest order out of various types of Shivalingas being worshipped in this World. Knowing the power of Bana Shivalingam through his transcendental vision, Siddhaguru Sri Ramanananda Maharshi consecrated numerous banalingas at Shiva Shakthi Shirdi Sai Anugraha Mahapeetam. 23 feet Bana Shivalingam consecrated as ‘Ramana Sai lingeswara’ . This is the tallest monolithic Bana Shivalinga .